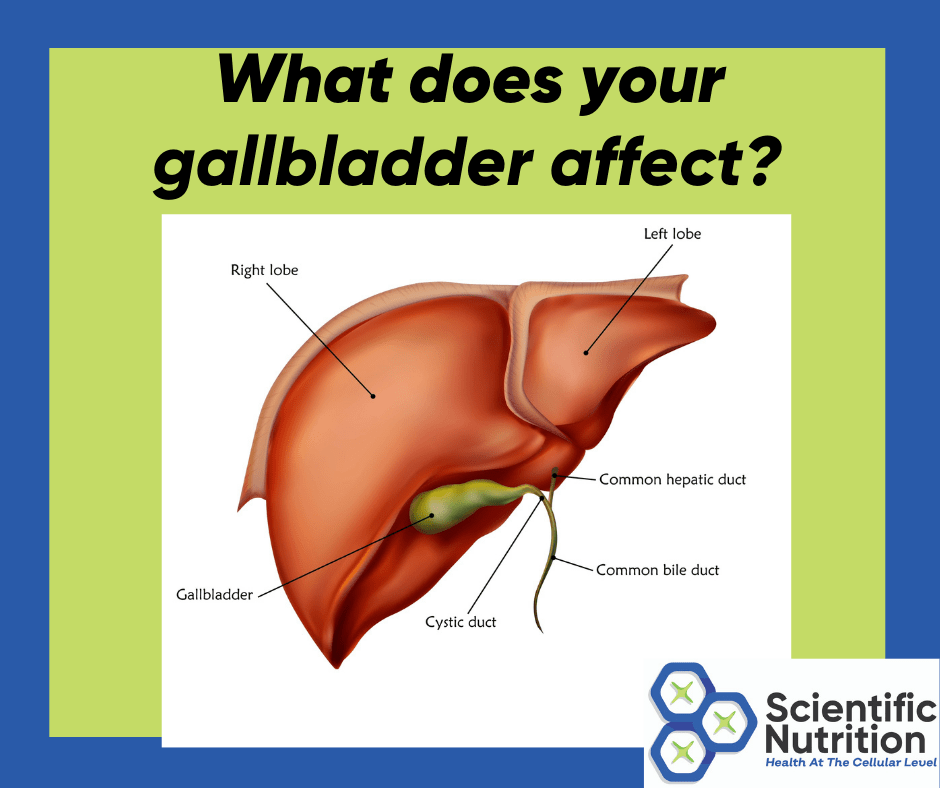 Gallstones can be painful, frustrating, and a challenge to remove.  Most people don’t think about them unless they start having issues in the gallbladder but they may also be causing problems in your liver.

When your liver gets congested from stagnation it may take a long time before you feel it.  Your liver cells can have advanced cell destruction triggering enzyme levels to soar when they are ruptured.  The damage has been done by the time this red flag goes up so detoxifying before an issue is necessary.

Gallstones are primarily formed in the liver in comparison to the gall bladder.  A conservative estimate is that 20% of the world suffers from gallstones in the gallbladder at some point.  This is lower than those who unknowingly have more in the liver.  Everyone can use a liver cleanse that will flush the gallbladder as well.

As this is part 1 in a series, let’s dig into some of the effects of gallstones on parts of your body you may not have considered.

How do gallstones contribute toward a UTI (urinary tract infection) or bladder issues?

The liver needs the proper amount of bile to break down foods so that undigested bits aren’t allowed into the blood in the form of putrified or fermented toxins.  The blood that leaves the liver goes through the 2 kidneys via ureters (tubes), into the bladder, then out through your urethra (exit of the body).  Each day your kidney filters approximately 25-40 gallons to eliminated broken-down cellular protein and toxins to 34-52 ounces of urine.

Why is a more alkaline based diet better for you?

When too much acidic material is clogging the liver it will push it out into connective tissues to avoid a life-threatening event.  When lymph fluid can surround the waste it will release sodium bicarbonate to neutralize it.

If the toxins are coming in faster than the body can eliminate them quick enough or thoroughly, we drop in health regarding nutrition absorption, oxygenation, and hydration.

How are gallstones linked to high blood pressure and diabetes?

If you are lacking bile flow due to gallstones you will dump extra protein in the urine as found with ketoacidosis, have thicker capillary walls as it’s stored causing congested blood flow and possibly high blood pressure.

How do gallstones affect the bones?

You have 3 kinds of blood cells.

1-Red cells that deliver oxygen and nutrients to every cell of your body.

3-Platelets that help to clot bleeding so that you don’t bleed to death with cuts.

Gallstones directly interfere with nutrient absorption by flooding the plasma with waste products instead of nutrients or glucose/sugar for energy. Without proper absorption of your fats your fat soluble vitamins such as Calcium and D can’t be utilized to create new bone.

How are gallstones linked to hepatitis?

There can be significant amounts of viral materials within gallstones.  These viruses can infect liver cells faster as the stones grow the liver lobules can collapse when blood vessels are “bent”.  The poor liver defenses are down to fight viruses.  Stones may also inhibit the proper breakdown of medications, food additives, fungi, and cause allergies due to hypersensitivity.

How can gallstones affect the stomach digestion?

Our stomach lining has a protective mucous lining to buffer the hydrochloric acid.  When the mucous is too thin or scarce gastritis happens.  By eating more alkaline foods we can significantly reduce the number of strong acids released to avoid peptic or gastric ulcers, peritonitis, duodenal ulcers, stomach tumors, and esophageal reflux.

Gallstones can push bile back into the stomach decreasing stomach cells.  If antibiotics are taken, the good bacteria that breaks down malfunctioning or damaged cells is permanently diminished unless the gut flora is rebuilt.  The natural lasting answer is to remove the stones from the liver and gallbladder while eating a healthy diet.

Can gallstones cause oral issues?

Yes!! Not only does the disease start from the stomach, but it can also start in the mouth.  Since digestion and absorption are slow, the waste products can get stuck in the intestines.  When it decomposes it can cause bacterial infections such as viral herpes or oral thrush.  Unlike thrush or fungus, herpes is a virus that attacks your cell’s interior nucleus causing free radicals or dead cells.

Over time the toxicity in flames the gastrointestinal lining causing ulcers.  Once bacteria begins it can be a challenge to keep the existing toxins at bay much less the additional toxins the growing bacteria are creating.

Do gallstones affect the color of my poop?

Not a lot unless you are doing a flush or hard detoxifying push.  At that point, they may show up as small green balls resembling Brussel sprouts.  Our stool is primarily a food substance that is not digestible or absorbed.  It contains 1/3 of our bile along with foods that have been turned into waste left from our dead red blood cells.  These deceased red cells and bile give it the tan or brown color.  If a higher amount of undigested fat or bulk of green vegetables has been ingested, the stool may appear more green in color.

How is thrush related to gastrointestinal issues?

When large amounts of bacteria are in the gastrointestinal tract, due to slow-digesting that is bogged down with gallstones, thrush will show in the mouth. The mucous lining has too few good bacteria to keep fungal yeast in check so the thrush takes over.   I also see candida in the intestinal tract.  Often when someone has been on a course of antibiotics the yeast can get out of check creating issues.

How does the liver affect hormones?

When the liver is impaired it will increase the concentration of estrogen and aldosterone (pro-inflammatory) hormones which control your salt to water retention.

What are the signs of liver failure?

Once so many livers cells are damaged it will start to go into failure.  Symptoms result in:

How can Gallstones cause jaundice?

If a gallstone is stuck in a bile duct going toward the duodenum or the lobules, one will become jaundice.  The liver cells can’t connect and will release bile pigment called bilirubin.  If one has a tumor in the head of the pancreas the same effect will happen.  When it reaches approximately 3X the normal level, the skin and whites of the eyes will appear yellow.  This is toxic not only to the liver but the brain as well.

The gallbladder muscle contracts to send bile to digest acidic foods or proteins entering the duodenum from the stomach.  This bile emulsifies fats like a detergent.  Once bile salts have broken down fats, mostly be reabsorbed in the small intestine to be delivered back to the liver for reuse.

What are Uric Acid stones?

If the liver can’t break down protein, the by-product is passed onto the kidney, uric acid concentrates forming uric acid stones.  These crystals of uric acid can land in the muscles, joints, and play a role in gout.  Since all major diseases involving the urinary system are caused by toxic blood keeping the liver uncongested it is necessary to cleanse the liver regularly!

When sodium urate crystals form in joints and tendons it is due to liver toxicity.  Because the gallstones slow blood circulation and kidney function, the concentrated elimination of uric acids waste products cause a cellular breakdown.  Large amounts of foods that are rich in protein such as meats, eggs, cheese, and beans can cause gout to flair as they are stuck in the liver process.  In addition, low bile volume can contribute toward the severity of a flair-up.

How do gallstones affect acne, psoriasis, and skin issues?

Almost all skin diseases or issues are linked to heavy metal toxicity (as seen on a Hair Analysis) or a liver containing gallstones.  The blood impurities trigger auto-immunity and need an alternative eliminatory pathway.

Antigens, heavy metals, cellular debris, parasitic components, toxins, and unflushable waste becomes stuck under the dermis level of the skin.  When these offenders that are stuck attract pathogens and microbes that can’t be cleared within the inflammation.

The skin cells that would naturally sluff off, become malnourished and do not regenerate quickly.  This slow response also affects the sebum or oils in your hair follicle to become thin or brittle causing hair loss.  Sebum is also a fungicide and antibacterial agent.  Once the kidneys, colon, and liver are cleaned then maintained hair can come back to its healthy state.

As you can see in part 1 of this series, gallstones in the gallbladder and liver can cause a myriad of issues.  I’ll be breaking down how you can identify physical signs that you have them, the common causes of their formation, and the importance of taking these stones out of your body before they cause symptoms.

Learn more in part 2 on how gallstones are formed and how to avoid them.

If you’re ready to get personal on a phone call, find a good time to chat at HERE .

What parasites can humans get?

5 ways to start cell regeneration and why?

5 supplements or natural foods to boost your immune system?