Would you vaccinate if you were given odds of your child becoming autistic?

Why do you feel that way about vaccines?

This is a question I get often.  We all make decisions on behalf of our children regularly that can affect their quality of life. Some of them are simple like what to feed them for dinner, and some of them were life-altering like vaccinations or medical treatments.

We all choose what we feel would keep us safe and healthy but how much time do you invest in research before you make the serious choices?

If you knew the science-based risk of autism or toxicity outweighed the risks of what you are trying to prevent, would you take the chance?

How do I know if the vaccine caused my child’s injury?

In 1998 I did not have easy access to medical research, shared stories, statistics, etc. that we can take for granted while using google to look up answers. I followed the mainstream norm and trusted my pediatrician when I allowed my 18-month-old, smiley baby, to get vaccinated with the MMR (measles/mumps/rubella) shot.

The next day she had a low-grade fever and collapsed on the floor in my kitchen. Like any parent would do, I panicked. She seemed to look right through me, was not responding to anything I said, and was as limp as a rag doll. The paramedics rushed in and took my tiny girl onto the couch to assess her. After a few lifelong feeling minutes, they said her vitals were fine. They agreed with her pale, listless body was abnormal but informed me that they could not take her without finding anything out of the ordinary. The only instruction they left me with was to bring her to her regular doc for a checkup.

That afternoon I did just that only to be told she had stopped speaking because her older sister (3 ½-year-old) was talking for her so she didn’t need to as much and her spaciness would pass. Sadly, it did not. There were no more giggles, no touching allowed to comfort and I lost a part of her that day.

The next 10 years were difficult to navigate as teachers insisted she had ADHD (like they were doctors) and needed to be medicated. I pushed my medical carrier to test her abilities for answers as I knew what ADHD looked like firsthand with a family member.

While she followed the instructions of the educational psychologist I watched her respond to visual tasks brilliantly with pride only to bring tears to my eyes as she completely shut the doctor out with verbal instructions. Behind the one-way mirror, I broke down and began to connect the dots from her collapse as a toddler to her elementary stare as if no one else was in the room as the doc asked her questions. She was diagnosed with Expressive and Receptive language disorder and dyslexia which is not generically labeled in schools as a Learning Disability.

Our next step to help her was years of speech therapy to help her understand language. She had no concept of feeling emotions except for happiness or sadness.  She had no empathy, was never embarrassed and nothing caused fear (which is terrifying as a parent).  She couldn’t pretend to play with other little girls as they planned and acted out scenarios with dolls or stories because she lacked communication ability.  She has 3 sisters so you can imagine the catfights I refereed.  She did find refuge in swinging and doing physical activities with her male classmates. Thankfully they were there for her when the bullying began.

As she hit her teenage years and rebelled she became more difficult to reason with and struggled with school. At 16 she ran away. Not knowing where she was was every parent’s worse nightmare. I would drive the local towns until early morning asking everyone if they had seen her with my handful of pictures, praying, hoping… A week later she walked in the front door as she had just gone for a bike ride. I have never been so grateful, furious, happy, and exhausted in my life. In her usual manner, she was unfazed.

What was my next step? I brought her to a neurologist for extensive testing. At the end of the 4 hours, the kindest doctor explained to her that her IQ is normal but she has Asperger’s Syndrome which is on the milder side of the Autism spectrum. Her response? She laughed!! I asked her what was so funny and she replied “it sounds like ass burgers”.  Although I was glad she wasn’t devastated I was relieved to have answers. All of the dots connected that day with her behaviors, struggles, emotions, thought processes, and mannerisms. 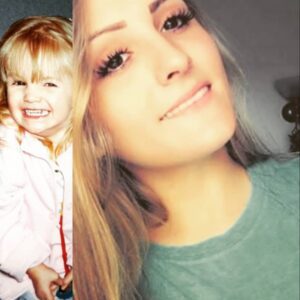 Is there hope? YES! She has been on a detox path as have many autistic children who also suffer from heavy metal toxicity, parasites, and auto-immune issues. After seeing her hair analysis results we were able to clear her heavy metal toxicity and potential parasites from causing more issues.

A few years ago she quit her job as a manager at Walmart to further her education full time.  She is now successfully an EMT II working toward a degree as a cardiac RN.

She is thriving and happy again!

I was not a pro-vax or anti-vax mom, just a young mom following the “rules” and what I was told was best. I now advocate for one type of vaccination at a time if at all but respect the choice each parent has to make. I try to educate on the studies, the ingredients, and the possibilities – not to turn people against them, but to give them an incentive to learn more before the plunger is pushed. I can’t take back the decision that robbed me of my cuddly, bright-eyed, brilliant little girl and live with the guilt daily.

I know we are lucky her syndrome wasn’t further on the spectrum.  I hope to spare another parent from it or at least help them understand the possibilities. If you disagree either way, please ask and learn why others feel the way they do, without judgment. We are all just doing the best we can with what we know so take the opportunity to grow in knowledge even if you don’t agree.

With the Covid-19 vaccine being pushed, I want you to weigh your options and remember you can’t take it back!!

If I could undo the damage, I would in a heartbeat.  If you choose to take it, I honor and respect your decision but please don’t judge my family for declining for this personal reason.

If you would like help to sort out your decision or look deeply into your cellular health, LET’S CHAT!

Click HERE to learn more about the effects of masks on children.

12 Things Hair Analysis can reveal about your health!

How can I reduce stress and anxiety?