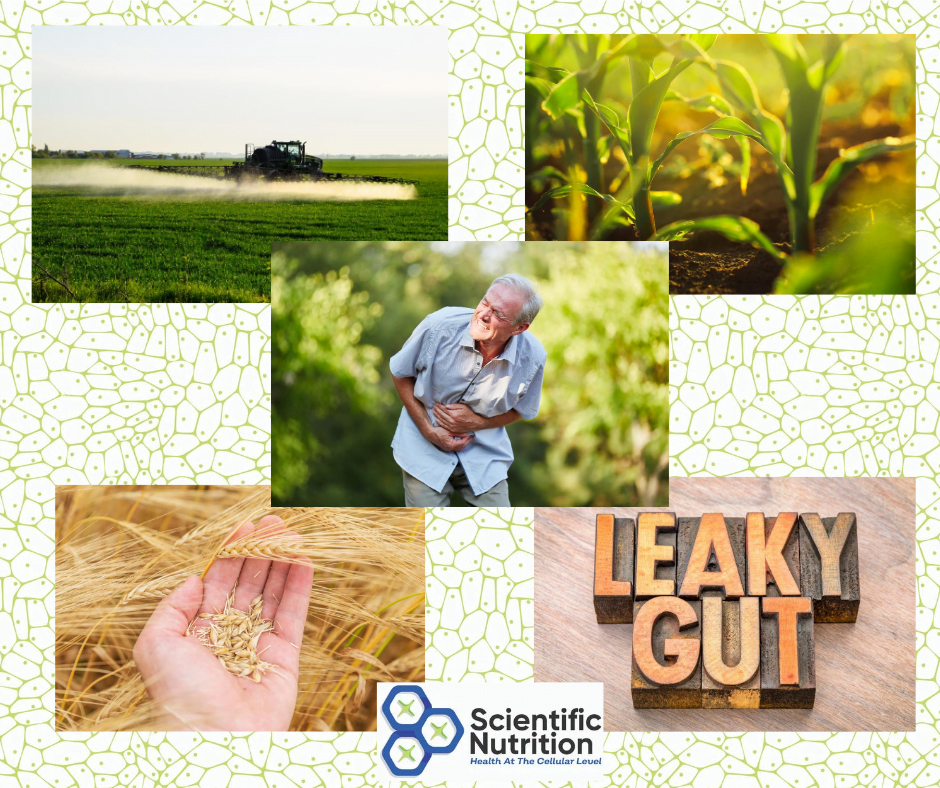 How is your health impacted by BT toxins and Glyphosate?

What are they and why should you care?

BT (bacillus thuringiensis) are toxins that are created by a soil-dwelling bacterium.  BT works as an insecticide by creating a crystal-shaped protein that kills certain insects. It targets insect larvae that kill their gut by the infection and then starvation.  It is found primarily in the grains (corn, soy, wheat, and cotton) and some of them are approved in organic agriculture.

They slow the digestion of proteins causing them to putrify, causing gas symptoms as well as reducing enzymes slowing digestion further.  GMO (Genetically Modified Organism) corn is registered with the EPA (Environmental Protection Agency) as a carcinogen, not a food.

Why should we be concerned with an insecticide?

When the animal eats the BT toxin it carries spores that germinate and grow in their gut causing death.  It transfers through to our gut! It tears holes through cells and in between them causing Leaky Gut symptoms.

These toxins don’t break down in gastric juices, with heat or amino acids but they are absorbed into tissues.  Bt toxins may be broken down by sunlight and in acidic soil. Other microbes in the soil can slowly break it down in the right conditions.

Why is GMO modification a bad thing?

Soy is 80-99% genetically modified with Roundup.  Soy oil has a fatty acid profile making it easily oxidized, which makes it turn rancid.  The transgene in the soy gets into our gut bacteria and changes our DNA, possibly making our intestinal flora a self-poisoning pesticide factory.  Rice is also highly affected by transgene mutation and has become high in Arsenic toxicity.

Roundup Ready grown corn produces its own insecticide. In fact, Roundup (made by Monsanto/Bayer) is 100X more toxic than Glyphosate alone.  There are more active ingredients listed as “inert” but their synergistic mixture slowly destroys our kidneys and gut. The petroleum-based ingredients that are within it oxidate and become corrosive.

When this chemical was used in India they were not only seeing some crop failures due to the drying effects on the plants, they had 190,000 suicides committed by farmers.  It affects our gut, our minds, and our mental health in excess.  The court system is now processing thousands of lawsuits connected to cancer deaths as well.

What do Glyphosate and BT toxins do in the gut?

Glyphosate can get in between your gut villi and “gum up” the spaces.  This can at times be seen as Celiac Disease on a biopsy as it causes the ends to flatten.  With the interstitial spaces between them clogged up, you are less likely to be able to absorb nutrition into the gut lining.  Once it permeates down to the intestinal wall it causes the tight junctures (like Ziploc baggies) to remain open allowing large food particles to get into the bloodstream.

Glyphosate alone is a mineral chelator (grabs them) which can cause nutritional deficiency and allow even more toxins or toxic metals to accumulate.  Detecting it in the urine is the most reliable way to note detoxification.  Bt toxins are measurable in the blood as well as the gut.  A Canadian study of pregnant women found that 93% of them and 80% of their unborn fetuses had BT toxin in their blood! The Aizawai BT strain is highly toxic to our honeybees as well.

For assistance in removing these chemicals in your gut

Read more on other toxins and how they affect your health.

Do you know what fluoride does to the brain?