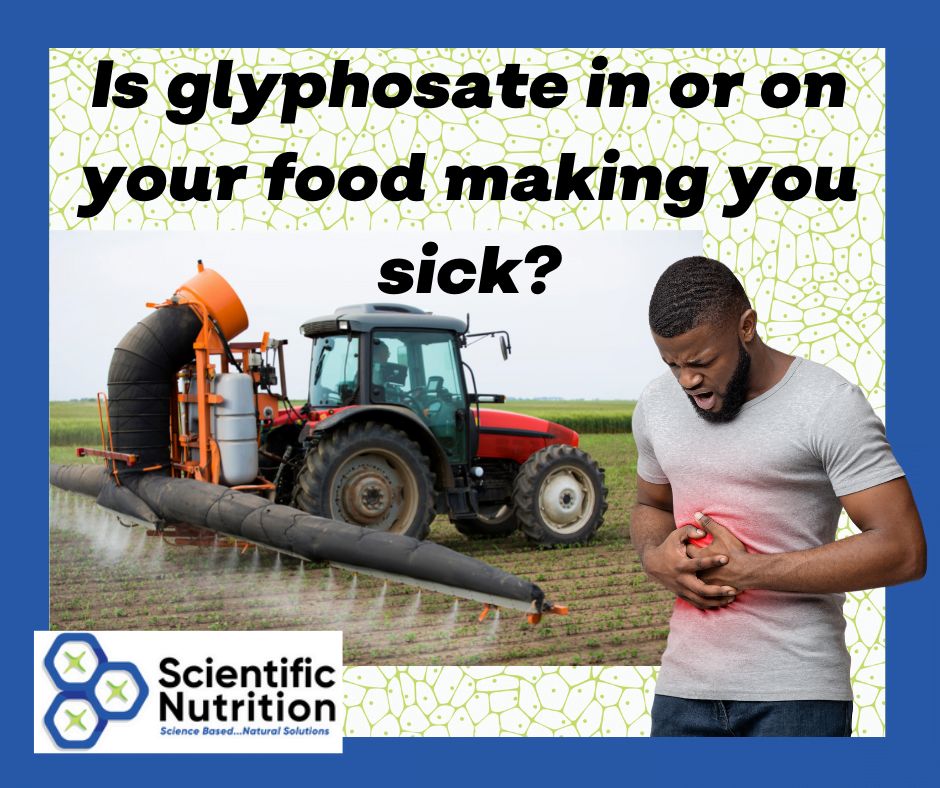 What is glyphosate and how can it be dangerous?

Glyphosate is the active ingredient found in Roundup.  It is a herbicide made by Monsanto that is directly linked to an increased risk of non-Hodgkin’s Lymphoma by 41-70% and bladder cancer among others.

The Canadian Food Inspection Agency found that 75-90% of their grains (including flour) are contaminated.  We are increasingly struggling to source clean food in every country.

What foods are highly contaminated with glyphosate?

Processed grains!  Oddly enough, Honey Nut Cheerios Medley Crunch contained levels of 830 ppb (parts per billion) which is 5 times the recommended level which is 160 ppb.  These types of cereals are what we feed toddlers for snacks!  Along with other processed foods that contain flour and other grains such as oats, we are contaminating our guts.

Sadly, other highly contaminated foods are carrots, corn, beets, beet sugar, canola oil (don’t ever use this garbage), almonds, quinoa, sweet potatoes, potatoes, soy-based products, and vegetable oils.  The longer the food is grown in the contaminated soil, the more it soaks into it.  Crops replanted in areas that are sprayed multiple times are even higher in parts per billion.

How does glyphosate affect the soil?

Supposedly it is degraded in the soil and water by binding to particles or eaten by microbes.  It does not degrade in plants quickly.  I don’t know about you but I don’t want to eat foods soaked with chemicals in the soil.

What other products may be contaminated?

We try to buy responsibly resourced clothing by buying cotton but it can be highly sprayed and a part of the fabric.  The glyphosate can touch your skin and possibly be absorbed as you perspire or just in normal wear.

Women need to be more careful as tampons and pads are found to be made of contaminated cotton.  Please invest in your health and use organic name brands such as Lola.  These fibers are in a highly sensitive area full of blood supply and tissues that are susceptible to absorbing this chemical.

You can also buy clothing made with organic cotton, many of which are of much better quality.  Bedding and mattresses are other good things to replace as it touches your skin for 8 hours a day and you’re breathing closely to them.

What are the symptoms of glyphosate exposure?

Everyday exposure can trigger vomiting, excessive drooling, fatigue, and a loss of appetite for starters.  As found in a 2018 cancer case the accumulation can cause cancer opening the door for now over 125,000 lawsuits against Bayer for Roundup.

How does glyphosate work?

It is non-selective meaning it kills grasses and broadleaf weeds unless they are genetically modified GMO to have resistance built in their DNA.  What this means to you is that the chemical is intertwined with the “food” you are eating at the cellular level.   If bugs eat the plants sprayed with it and their guts explode, what is it doing to yours?

Where is glyphosate legal?

It has been banned or highly restricted in U.S. states such as Maine, Florida, Texas, and California.  In fact, more than 40 countries have restrictions and The European Union has banned it as of 2020.   Countries such as Germany as of 2023 ironically own Monsanto under the Bayer Corporation.  Even Mexico will phase out usage by 2024 but the chemical takes a very long time to dissipate in the soil.

How does glyphosate work to deter weeds and possibly bugs?

I’ve followed it for years along with the work of Stephanie Seneff, a brilliant scientist at MIT.  She discovered and shared an alarming fact.

Follow me down a nerdy path for a moment.  Glyphosate inhibits the 5-enolpyruvylshikimate-3-phosphate synthase enzyme (take a deep breath) or shikimate pathway in plants.  We don’t have this enzyme pathway so Monsanto claims it is safe for us but guess what?  Our gut bacteria DOES!

Ms. Seneff also has found a jaw-dropping link between the increase in glyphosate usage, autism, and SIBO (Small Intestinal Bacteria Overgrowth) for those who would like to dig deeper.

Why are so many people gluten sensitive or have Celiac Disease?

They have a Leaky Gut which leaves the opening of their intestinal villi into the bloodstream open so that large particles of foods (including gluten) get through causing an inflammatory reaction and then an allergy-type reaction.

My husband was diagnosed with Celiac Disease after a gut and endoscopic biopsy.  For years I didn’t believe the diagnosis until HE proved me right.  He did the usual avoidance of crumbs and ingredients that could cause the painful chest pressure below his sternum and belching for years.  Over 5 years later, he decided he was going to eat pizza from the most loved pizzeria in the city.  I thought he would come home in pain to be laid out for days but nope!  They used organic, non-GMO flour!

We went out on a limb and purchased this type of flour from Costco and made a fresh (non-cardboard tasting) loaf of bread that he happily ate throughout the weekend with no symptoms or side effects at all.

He had healed his leaky gut through the years on my program and changed his eating habits significantly.  Now knows to only eat the uncontaminated grains on occasion.  It was his choice to test the waters and it turned out a good call so if you have the diagnosis do this at your own risk.

How is this affecting our environment?

Some grains are saturated by being sprayed up to 3 times before harvest to dry them enabling farmers to plant another crop.  It not only kills crops that the bad bugs eat but also the food source for Honey bees that propagate our foods and monarch butterfly foods.  Time will tell what impact it has on earthworms, ants, birds, reptiles, fish, and other insects.

What is the best way to avoid glyphosate?

Start with buying and eating only organic, non-GMO foods.  This will not only eliminate the contamination on the outside of the food but also within the DNA.

Are you ready to detoxify your diet and environment?

Learn more about glyphosate and other toxins in your food.

Why is the EPA still poisoning us with pesticides?

How to easily grow your own food!