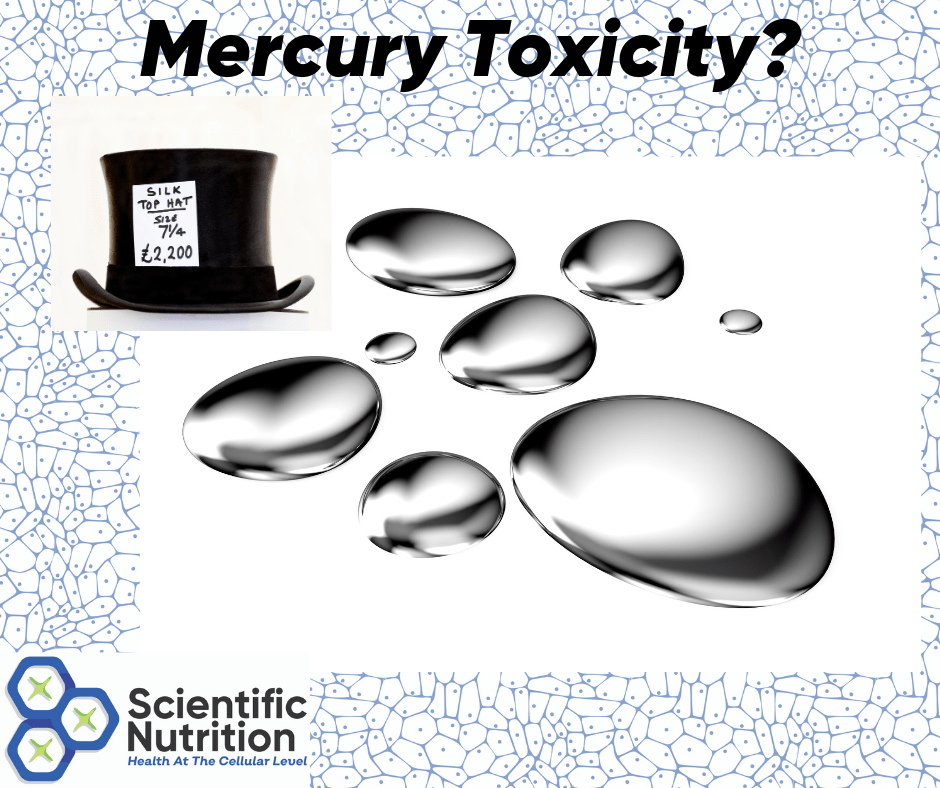 See your Mercury levels on a Hair Analysis

We are constantly subjected to mercury exposure. The symptoms range from hair loss and dizziness to thyroid or adrenal dysfunction.

Sometimes a toxic level can affect us physically in the form of birth defects, autism, or delayed development.  Energetically it can inhibit the enzyme ATP which is our energy source at the mitochondrial level.  This toxic metal can degenerate nerve fibers affecting motor skills reaction time as seen with MS, sensory nerves involved in your senses including hearing or vision as well as painful limbs.  The common symptoms might be migraine headaches, fatigue, insomnia, leaky gut, memory loss, immune system issues, hearing loss, anorexia, rashes, or even schizophrenia.  In later stages of accumulation, it can be linked to weakness, falling, tremors, or slurring speech.

I have personally worked with a young man aged 16 that was able to get his schizophrenia symptoms well under control without medications after detoxifying both mercury and copper which are primarily a primitive female elemental heavy metal.  His “evil” voice was a female that would badger him relentlessly.  He was able to manage his behavior and not suffer further once he was nutritionally balanced along with detoxification methods.  It can cause one to be unstable, over-emotional, devious, and “kooky”.  If you recall the crazy antics and mind jumping of the Mad Hatter in Alice in Wonderland, you will understand the term ‘Mad hatters disease’ coined from the men who would shape beaver pelt hats in the last centuries.

What are the qualities of mercury?

If you haven’t seen this liquid type metal in the past from a broken thermometer or science class, it is a heavy, shining, conductive, extremely acid-forming metal.  It can kill germs on contact which is why it was used in a product called Mercurochrome up until the early 80s.  It was a pink colored liquid used on cuts that could be a source of some toxicity.  Mercury is colorless and odorless but very toxic to humans and all mammals.

There are 2 forms of mercury we are exposed to, Methylmercury which can build up in fish and marine mammals to levels that are thousands of times greater than levels in the surrounding water.  Even this form can trigger cancers.

The second form is one of the most poisonous forms known, ethyl-mercury.  It is added as a cheap preservative Thimerosal in flu shots and some vaccines.  Other exposures may include paints some artists work with that was later realize contained methylmercury.

Where does Mercury accumulate the most?

Mercury loves the thyroid and pituitary gland that triggers the thyroid to produce your hormone TSH and T4.  It also steps in to weaken the adrenals as well as kidney congestion or damage.  Removing it from storage sites can take time as the body is so intelligent it will store it within to keep you as healthy as possible.  If there is a toxic level onboard, it is a great indicator of co-existing copper toxicity overlying the mercury.  It may take 8 months to a few years to clear it safely.  Remembering that it takes time to accumulate may help one be patient with the chelation that works slowly with nutritional balancing.

What are some sources of Mercury?

How do you know where your Mercury levels are at?

You can do a blood serum test but it is not used often as the blood will clear the toxicity as soon as possible and store it in tissue for safety.  A urine challenge test that uses DMSA or DMPS to chelate/push it into the urine can pick up some of the eliminated accumulation but not the load that is buried deep in the organs and tissue.  Hair mineral analysis is best for seeing long term accumulation or recent serious exposure.  Although it may take time to antagonize or pull mercury out, the hair levels can be up to 300 times higher than blood serum levels so much more accurate of a measure.

Are you ready to see where your levels are and begin your detoxification process for a better quality of health?

18 Symptoms of a serious Magnesium deficiency

12 Things Hair Analysis can reveal about your health!

Do you know where all illness begins?