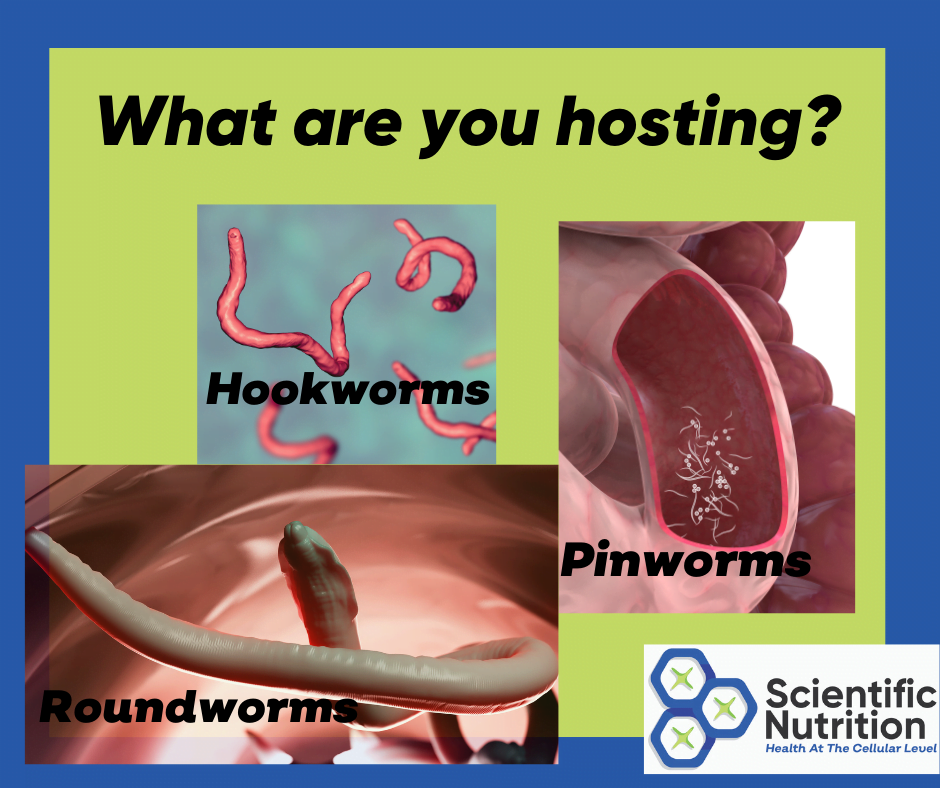 Do you know how parasites enter the body or where parasites live?

There are many parasites that we may be hosting without even knowing it.  Many different parasites trigger a multitude of symptoms.  I’d like to break down the most common ones and share a little information on how to link illnesses and issues together to find answers.

There are many species of Roundworm including:

Roundworms are the most common parasites, particularly in warm climates.  At least 25% of people around the world are infected with at least 65% carrying them.  Although parasites are more prevalent in places with poor sanitation, they affect us all, even the wealthy are affected.  The ingestion of eggs can enter through fruits, vegetables, and contaminated soil.  You can understand how children are more frequently infected as they play or have contact to the dirt often.

A female roundworm can release 200,000 eggs PER DAY that travel from the digestive tract into the lymphatic and circulatory systems.  They migrate into the trachea and can even get into the brain, ears, and eyes causing permanent damage.

These buggers can live for a couple of years eating your nutrients, leaving behind waste toxins that you need to clear.  They can release a toxic protein as well as hydrogen peroxide to feed their babies.  Yuck right?

Worms such as Hookworms can be the root cause of anemia and malnutrition by consuming large amounts of blood daily.  The eggs are left behind in fecal matter to hatch and live in the soil until a human walks along barefoot or in the garden. They can burrow into the skin causing itching and possibly blisters.

After circulating to the lung they “swim” to the trachea then are swallowed into the digestive tract to make a home.   These buggers can lay 30,000 eggs each day.  After they sink their teeth in, you will develop anemia, malnourishment, and listlessness a person may feel weak or mentally slow.   They also cause diarrhea, nausea, and indigestion.

What are some types of hookworms?

Strongyloides stercoralis is similar but the mature worms will produce their larvae within the body instead of the cycle starting externally.  This reinfection can cause heavy infections in people with an autoimmune disease or even a suppressed immune system.

Trichinosis is a carnivore, meat-eater parasite.  Its larvae can typically be found encysted in pork.  Once mature in the host it mates in the intestines releasing large numbers of offspring.  The juveniles chew out of the intestine causing diarrhea, fever, pain, infections, and possibly food poisoning.  As they move into the tissues, particularly around the hands and face it causes swelling.  The larva burrows into muscle triggering encephalitis, pneumonia, kidney, eye, and brain damage. They will stay within muscle eventually calcifying to look like a cyst.

Pinworms are the most common roundworm in the U.S.  They thrive in crowded areas and are very contagious if one member of the household has them.  They are from 2 to 13 millimeters and white.  The adults live in both the small and large intestinal tract but it is the females that inch down to the outer anus to lay up to 16,000 eggs a day.  They are so tiny they can travel through the air to land on fabrics or walls.  Children may be fidgety, sleepless, cranky, itchy bottoms, and have digestive issues.  This tiny parasite is a big reason to line a public toilet with the tissue before sitting!

Ancylostoma Caninum is again from soil contamination from a dog or other animals.  It will burr 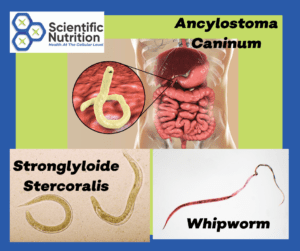 ow into the skin causing itching and discomfort. It is unable to go beyond the skin so it will travel under the skin for a few months until it dies or you eliminate it with anti-parasitic.

Whipworms love humid climates with lower standards of sanitation.  It is approximately 3 to 5 centimeters long.  We can become infected by eating foods that were in contaminated soil or water as well as fruit or vegetables.  The female can lay 3-7,00 eggs each day in the small intestine.  If one has a serious infection it can cause damage to the intestine, appendicitis, or edema of the rectum.

Dog Heartworm is a little tissue and blood-living roundworm.  Often found in humans due to mosquito bites.  These worms pass along from the mosquito’s gut while it feeds on us and our four-legged friends.  In humans, it will live in the lungs, blood vessels, and heart causing chest pain.  Just as it happens with canines, blockages can occur in various organs.

Toxocara Canis is typically found within dogs and cats but can be living in humans through the ingestion of contaminated soil.  Almost all pups and kittens carry infection so washing hands is very important, particularly under the fingernails.  The eggs hatch in the intestines to mature just to travel through into the circulatory and lymphatic system to the liver then sooner or later in your lungs causing issues.  In humans, they may end up in organs or even the retina leading to blindness.  Muscle and joint pain, fevers, rashes, and convulsions are commonly a link too.

What are the symptoms are of parasite infections?

Being that these worms gather together they will form tumors which may be a diagnosis of a lipoma (fatty mass) or cysts.  I have had a few clients who had multiple “cysts” on their extremities and torso dissipate after doing anti-parasitic modalities.  These tumors have been identified since 1937 by Professor Brauchle where he pointed out sore heels are a good indicator.  It has also recently been recognized that all types of cancers are infected by worms even if tumors are not present.

In the next 4 parts, I’ll walk you through the flukes, tapeworm family, spirochetes, and single-cell parasites.  It is important to know what may be causing health issues so we can eliminate them.

What your liver does and when you need a liver cleanse?

Why is your gut to brain connection important?