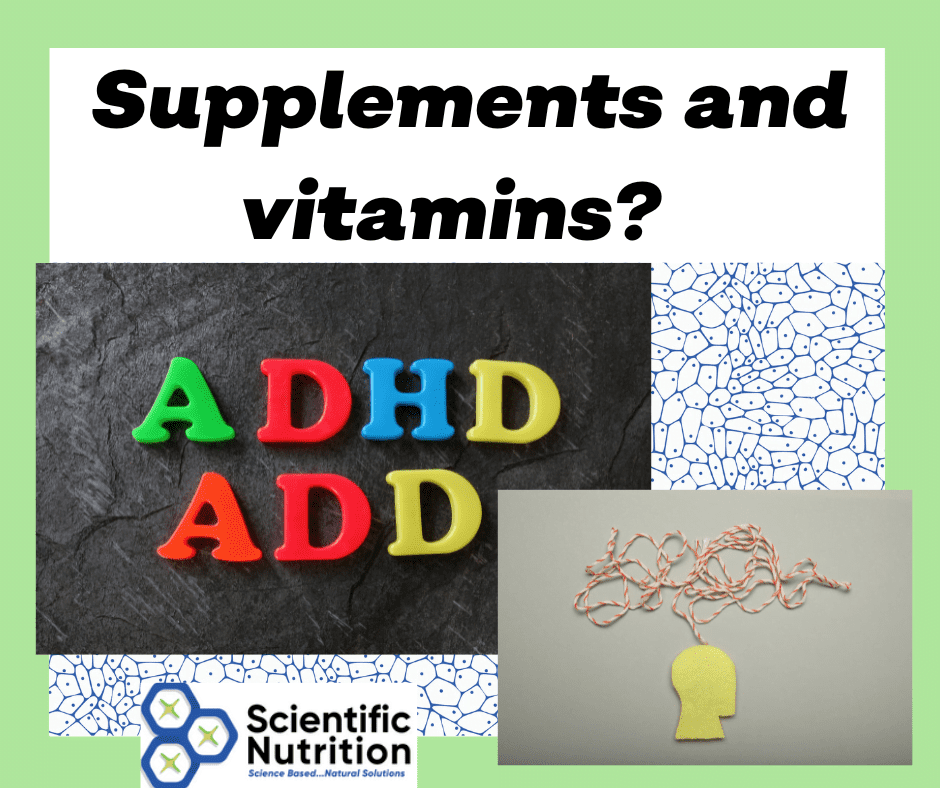 My friend and Founder, Pamela Wirth of hellohealth® wrote this terrific article I want to share explaining how supplements and vitamins can help with ADHD and ADD I wanted to share;

ADD, also known as attention deficit disorder or ADHD also known as attention deficit hyperactivity disorder, is one of the most common childhood diagnoses lasting into adulthood, which is marked by a person being inattentive or impulsive. The condition can occur based on the events taking place in a child’s life; however, it is thought to be largely based on genetic makeup. According to a recent report, 9.6% (more than 6 million) children between the ages of 2 to 17 years old are diagnosed with ADD/ADHD in the USA. In many cases, this neurodevelopment condition is inherited from parents through their genes.

People who have ADD/ADHD can benefit from routines.  Whether at work, school, or interacting socially, it can be difficult to remember simple tasks, and having a routine may help. Common symptoms of ADD/ADHD include:

Vitamin C is responsible for producing the neurotransmitter dopamine, which helps people with attention, mood, movement, and much more. Moreover, people with low Vitamin B12 may experience irritability and fatigue. Vitamin B12 supplements can support activity and performance.

A good sleep cycle is important for calming the body and lowering the symptoms of ADHD. Disturbed sleep patterns could be a side effect of any medication prescribed for ADHD, which elevates the nervous system and brain activity. Magnesium Glycinate calms and supports the body’s ability to sleep well.

Mushrooms such as lion’s mane are regarded as a helpful food as well as supporting brain health including mood, memory, and cognitive health.

Research on the therapeutic potential of the lion’s mane mushroom indicates this fungus has the potential to promote the production of nerve growth factors and repair nerve cells. It appears to support the symptoms of dementia, mood disorders, and neuropathic pain, as well as improve overall cognitive function.

A study held in Qatar showed that iron deficiencies can augment the symptoms of attention deficit hyperactivity disorder. Moreover, several studies have shown that iron (ferritin) also plays an important role in optimal brain functioning; iron supplements nourish the body to strengthen its functions. Too much iron is also dangerous for the body so always consult with the doctor before taking any supplements.

Sufficient stores of vitamins and minerals are necessary for ADD/ADHD patients as they not only lower the symptoms but amplify the proper functioning of the body. In research, low levels of vitamins are associated with the severity and strengthening of ADD/ADHD symptoms. However, healthy levels of minerals and vitamins can ease a busy brain and improve hyperactive symptoms. Aggression, emotional regulation, and improved inattention are the most common symptoms that are improved in ADD/ADHD patients, according to a study performed in 2017. These could be a little costly for the parents but can significantly affect the child’s health.

Focus, cognitive skills, and behavior are the three major things that you can properly maintain with the consumption of Omega 3 fatty acids. The good sources of Omega-3 fatty acids include Kidney beans, flax seeds, walnuts, canola oil, chia seeds, salmon, sardines, and other similar fish. Impulsivity, attention, and hyperactivity are the main areas of support with the consumption of Omega-3 supplementation.

For vegans, algae oil is recommended instead of fish oil.

The deficiency of zinc is related to difficulty focusing and paying attention in ADHD patients. research suggests that zinc supplementation not only improves attention abilities but also lowers impulsivity and hyperactivity symptoms.

Vitamin D3 deficiency is quite common among children as well as adults globally. But recent research has shown that people with ADHD have greater vitamin d3 needs. Moreover, the research found that children with mothers having vitamin deficiencies are more at risk of developing attention-deficit hyperactivity syndrome.

Inositol is a carbohydrate found in several foods such as whole grains, bananas, pears, peaches, and oranges, and is formed in your body naturally. It has a calming effect on your brain cells and is considered to be helpful in patients with ADHD.

Ginseng is a natural herb with plenty of benefits for the human body, including good memory and optimal brain functioning. Even in normal healthy people, Ginseng bolsters the body’s ability to improve auditory reaction time, sensory-motor functioning, attention, and other cognitive functions. Research has shown the neuroprotective properties of Ginseng, which indicates that this herb supports the body in supporting impulsive behavior, hyperactivity, and inattention.  Moreover, a study concludes that Ginseng has an element named ginsenosides, which reinforces the body’s norepinephrine and dopamine concentrations, which boosts brain development and results in positive neurodevelopment.

Natural supplements may support those with ADD/ADHD who desire more focus and attention. In all circumstances, consult with your doctor before consuming any supplement. If you notice any side effects of a supplement, stop taking it and immediately report this to your physician.  Copyright hellohealth 2022

In addition to this terrific list, I highly suggest anyone struggling with ADHD or ADD do a Hair Mineral Analysis.  There are multiple nutrient deficiencies and heavy metal toxicities linked that we can correct to alleviate symptoms!

LET’S CHAT about your health.

Minerals vs vitamins, which is more important?

Is taking Zinc supplements a good idea or harming you?